Well…sit down, grab a wee bitta food to munch on, and enjoy a blog post that has to equal 3 vlogs because I am simply that bad at keeping this up-to-date whilst trying to juggle my everyday life. But this one will be quite a long one, so enjoy.

Once again taking you back to January (the end this time – not the beginning. Thankfully that means this is only 32 days late!). On January 28th, 2018, Tobias made his first trip to our new yard (well. Our yard. But it’s his first time there, so it’s new for him). We grabbed him out of the field IN THE SNOW, and loaded him up onto the box to come back to get a bit of an MOT. Sadly, the stable was not free and so he had to leave on the same day – so he just got his feet done. It did, however, mean we got to see how sound he was on concrete and not a muddy field. It was amazing spending the day with my #1 goofball and it made me really miss seeing him everyday. He still needed his teeth done, so we spent the entire day with him before returning him back to his 3 girlfriends later that same day.
Vlog #1 – he has a day trip & Bonnie’s physio date.

…and so, he stayed out for another two weeks. On February 15th, we brought him back for a date with Michael Lennon (the amazing calming dentist who all of my horses seem to like) and his teeth were really quite bad. His mouth was unusual in that one side was waved while the other was level (when Michael last seen him, both sides were waved). His teeth were very sharp on the top left which had resulted in ulceration, but since Michael had taken care of that, Toby would heal up nicely in a few days but we were to expect him to not eat as well. I didn’t really take any notice of that warning, since it had never been an issue before in previous dental treatments. Tobias? Not eating? not possible!. But he didn’t really eat. It was incredibly strange – he has always been a gorb. However this time I did notice a massive difference in how much he was eating – so his mouth must’ve been really quite bad this time.

We have had Tobias for over 7 years now, the majority of his life. He has been through a lot in this time, and last year he had to be retired from ridden work. This was largely due to the acceleration of his arthritis brought on by the shifting of weight from breaking his withers (you can read more about my feelings and more detail on his retirement in this blog post from 2017). It was around this time of year that Tobias broke his withers when a horse landed on them due to being in a fight (which I’m not going to go into..long story short – Bonnie was moved without our permission and Tobias ended up breaking his withers). He was very, very lame at the time and the vet didn’t even need to take more X-rays as he determined that due to his legs alone, he wouldn’t be ridden again. So Tobias spent all that time out in the field – and it was truly the best medicine.

It is early days yet, perhaps too early to get excited – but is that stopping me? Of course not. 6 days later, on February 21st, I sat on my beautiful boy again and I have ridden him basically everyday since. We just walk (although yesterday, he did do a few strides of trot and felt great). He was SO well behaved, just a little babyish at the beginning – but I mean, come on, he hadn’t been ridden in a year – could you really expect anything else?

Coming back into work like a true professional, the next day we even ventured out on a bareback hack! Mum took Bonnie (who is awful to hack. I would much rather take Tobias with no saddle that Bonnie with superglue attaching me to the saddle. Fair play to my mum for braving it with her). Everyday, we go a little further and do a little more. We ventured onto the roads, into the arena; and even showed my Instagram followers some of Loughanmore Estate (over the wall. I was ‘insta vlogging’ and thought I’d show you some of the XC course that is visible from the road. You can see that on my Instagram highlights on my profile @equistoryni). I cannot describe the happiness I feel to have my boy back home. I just look at him and smile. I shouldn’t say this, because I should love them both equally – and of course I love Bonnie to pieces – but he is just my heart horse. I’ve been with him an awful lot longer, and been through so much with him. He has been there and been my rock through everything from being bullied in school to the death of my dad, dogs and grandparents. He can put a smile on your face even when your in the worst of moods and lets not forget those big slobbery kisses he just loves to give. 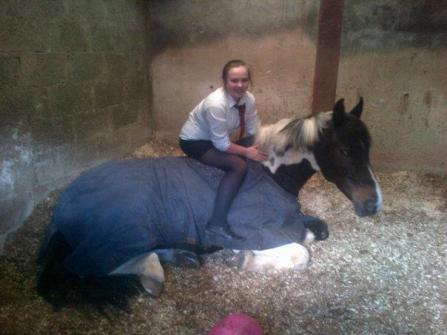 It wasn’t just me who was happy to have him back. Bonnie, who due to my trust issues after everything that has happened to Tobias, hasn’t been in the company of another horse since he left. She has had no horse-to-horse contact and so she was extremely happy to have her brother back. Bonnie and Tobias kind of ‘grew up’ together, as when she arrived on the yard he was one of the first horses she bonded with along with Cayenne. Her old owner and I were very close and often rode them together after school, and so they spent an awful lot of time together – and were both the same age, so ended up doing similar things in regards to trotting poles and brain training exercises.

Expecting an eventful reunion, I employed the help of Bronte to help me separate them if required. But in all honesty it was the most uneventful reunion in history. Bonnie wanted to play, Tobias didn’t – she spent 20 minutes annoying him, screaming at him and then he played and she was happy. Time since has been spent grooming each other every time they get turned out together, which we try to do everyday, especially as we do not want Tobias to get stiff, the more he is out of his stable – the better.

So that’s all for now. This was shorter than I thought it would be but that’s because I don’t want be ultra soppy and pour my heart out to a computer screen. You get enough of that on my Instagram on a regular basis.

So, I’ll see you next time!

Check out my latest video MY AT HOME HORSEY STORAGE/SHED TOUR  below: