I really need to timetable myself time to blog. Because otherwise, I end up having to catch up a lot. So I guess I’m back to catching up. I won’t even promise to try keep up, because we all know, I won’t.

On March 6th, I rode Bonnie and she had been very excitable for her first day back doing polework per the instructions of our physio (I talked about that in my last post – click here to read it). She was going great! I talked about it on my Instagram – click to see the post.

On March 7th, Bonnie seen her physio again. Boo unfortunately went lame after her antics and the physio referred us to get investigative tests done to see what is up with her, so we headed to the vets on Monday the 12th of March, at 2pm. This was after the trot-up and Bonnie was dropping her pelvis on her hind end. The physio did not want to work on her without further investigation from the vet.

We used a equine specialist veterinarian this time, and from the minute we arrived I felt at ease about the situation. I already knew the vet we had chosen had a great reputation, but meeting him in person confirmed that I had made the right choice – and throughout, he has been nothing but supportive even when we are making no sense with worry!

When we arrived, we first did a trot up (well, a few) before the vet took her off me and trotted her in a tight circle around him – and i can honestly say I have never seen her so lame. It was a harsh shock, especially since she had been lame on-off since she got kicked in August and we had been told previously it was merely muscle damage.

After the tight circles, Bonnie was taken into a lunge pen and loose lunged around where her lameness was again, very noticeable. Immediately we were told there are 2 issues here – a joint problem, and a muscle problem.

The joint problem was severe osteoarthritis as a result of a trauma. It developed very rapidly, the trauma only happening in August, and this was determined by the fact her other leg was completely fine.

The muscle problem was a mixture of the trauma and the way she had been moving her leg since. It had left her with large, gaping holes of muscle tissue in her flank.

In the following slideshow, it begins with her perfectly healthy hock (L) and then shoes her damaged hock (R) and the differences. The ‘parrots beak’ should not be there. We then move into the ultrasound images of her muscle, where the white is healthy tissue and the dark is no tissue at all. As you can see, there was considerable damage.

We put her into a box to get X-Rays and ultrasound scans. Immediately afterwards, when he was looking at the scans, I could tell it was bad news – he made that horrible “mmm” sound vets do before they deliver you bad news. I knew immediately because I used to work with vets and I have heard that sound many times before. I was immediately thinking “Oh god, it’s unfixable…what is going to happen to her?” because obviously – when it’s your own horse, you panic 1000000x more than if it belongs to someone else.

We were presented with our only treatment option due to the stage it had reached: chemical arthrodesis and stem cell treatment.

Chemical arthrodesis, from my knowledge (and what I recall inbetween my panicking that day!), is a chemical injected into her bone to burn off the excess cartilage and then fuse her bone. So, instead of a mechanical movement, she will have a “snap” as he called it – so her leg will “snap up” instead of a joint moving. Essentially, he disabled her joint from being painful. This is my understanding from a non-veterinary perspective, because vets use big words I do not understand nor have time to look up.

The stem cell treatment then used her own blood (I think) which was taken and sent to labs to retrieve the cells. This was then injected into a large portion of her flank and around her hock. So far, our vet has seen her 3 times since (with no scans, but those are due in 2 weeks time), and each time her muscle has improved drastically. He actually seen her today, only that wasn’t an intended visit.

We left Bonnie at the vets that day and picked her up on Wednesday, March 14th, and since she has been in rehab.

Watch the vlog of our veterinary adventures below:

Her original rehab plan was –

However, and I will say I was sad about this, Bonnie needed to be shod in a special way, and it meant giving up our barefoot aim. A small price to pay for a happy horse. She is now shod on all 4 feet – and on her back feet she had bilateral shoeing with a square toe (and twice the thickness). This was doctors orders.

The little princess, though, unfortunately had to be hot shod. Absolutely terrifying, according to Bonnie. We couldn’t be there for either unfortunately. On first attempt, my wonderful farrier attempted to do it with no one there, as she is normally 110% to shoe – she shook like a leaf and the farrier had to call it a day. On the second attempt, our yard owner smarty gave her some sedalin first and so it was a pleasant experience for all because she wasn’t messing around!

By the time we had got all of this sorted, we had been on box rest for 3 weeks. A week over, but I believe this is what has helped us along the way as her behaviour got increasingly dangerous.

Every horse will act differently to box rest. Bonnie was completely fine, originally, albeit a little fresh, which is expected. I even taught her a new trick! We spoiled her with long grooms, extra cuddles and scratches, and her treat ball and extra treats everyday. 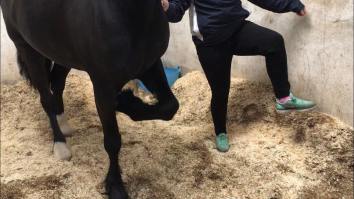 The real problem came when we began handwalking. The first day, much to my surprise, went perfectly. Infact, most of them went okay – until we got into longer distances of walking. We decided to long-rein Boo after the first day because, being honest, she has no manners on the ground. She will happily trample you and drag you off your feet. However, as she is broken to drive she long-reins particularly well. Everything was going perfectly, the odd spook, the odd little “bunny hop” which had us so worried, but the real bad behaviour has come into effect the last few days. Even over the last week or so, her stable behaviour has got increasingly worse – following you in the stable, trying to bite, pinning her ears back; something we had gotten over this time last year!

Bonnie has become very dangerous. 3 days ago, she bucked out and just missed mum as she was walking her (I have been ill or working and my poor mum has been left with everything). She has been doing her best black beauty impressions and rearing and kicking her legs out. This escalated to turning to face mum and kicking out her front legs at her while in the air.

Yesterday, however, she took her ‘vengeance’ to a whole new level. At the end of the first loop of her walk (she has been walking down the back lanes a few times a day on the long lines), she double barrelled out and THANKFULLY my mum was able to get out of the way so she only got skimmed at her side. Not satisfied, Bonnie began to rear and kick out, again with her wonderful black beauty impressions, and then tried to take off – with mum still hanging on. She pulled and pulled and mum said she literally thought her arm was going to pop  out of her socket, so she let go. Bonnie galloped off back to the stables – albeit, completely sound with her new leg motion, something I’ve been worried about. When she got back to the stables, she reared a few times before the wonderful Mandy made sure she didn’t escape and Joe caught her until mum made her way back.

However, she wasn’t supposed to be leaving walk for another 2 weeks yet.

Mum phoned our vet who came out and checked her over and noted she was completely fine, and Bonnie was finally less psychotic to have let off a bit of steam. Her leg was completely fine – and I honestly think this was due to the extended boxrest, because she galloped over a hard stone lane and the concrete to get back to the yard! She got trotted up for the vet who then decided, for everyone’s safety, to change her rehab plan.

Her rehab plan for the remaining time she is on it now consists of:

I’ll make sure to keep you updated this time (promise) since that’s all I have for now. I’ll also do a vlog and update it, and I need to edit the boxrest routine I filmed a while ago!

Check out my latest video SLEEKEZ REVIEW  below: